Three men were convicted Tuesday in Russia of masterminding and carrying out an acid attack on the Bolshoi Ballet's artistic director, Sergei Filin.

Prosecutors at the Moscow court have asked for star soloist Pavel Dmitrichenko to be given nine years in prison, according to the official Russian Legal Information Agency (RAPSI).

The prosecution wants a 10-year term for Yuri Zarutsky, who admitted carrying out the attack, and six years in prison for Andrei Lipatov, who acted as Zarutsky's driver, RAPSI reported.

Filin was walking up to his Moscow apartment in January when his masked assailant tossed sulfuric acid onto his face, leaving him severely burned and nearly blinded.

He has spent much of the past year in Germany, where doctors have been working to save his sight.

The case -- which has been closely watched both in Russia and elsewhere -- has exposed the tensions and intrigues simmering below the surface at the world-renowned ballet company.

Dmitrichenko argued during the trial that he had wanted Filin to be punished in some way for failing to give him the roles he wanted, for example by being beaten up. But, the dancer said, he did not expect Filin to be subjected to an acid attack.

In his evidence, Zarutsky told the court that the acid attack was his own idea and that he had not told Dmitrichenko about it.

Many fellow Bolshoi dancers signed a letter asking the judge for leniency for Dmitrichenko.

In his summary, the judge said in his view the attack was organized by Dmitrichenko.

The three are expected to be sentenced later Tuesday. 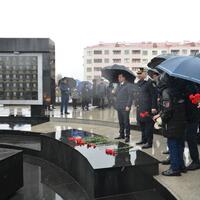