Asked about coming to Taipei's defense during a CNN town hall, Biden said "Yes, we have a commitment to do that."

He was likely referring to the Taiwan Relations Act, a 1979 law that has guided US relations with Taiwan. Relations have also been informed by what are known as the Three Communiques, which are bilateral agreements with China.

None of the agreements explicitly state the US will come to Taiwan's defense, but the Biden administration has repeatedly said its commitment to Taiwan is "rock solid." The Taiwan Relations Act says the US "will make available to Taiwan such defense articles and defense services in such quantity as may be necessary to enable Taiwan to maintain a sufficient self-defense capability."

Tensions have recently escalated in the Taiwan Strait, where China sent more than 150 sorties into what Taiwan calls its air defense identification zone (ADIZ).

Beijing claims Taiwan, an island nation of 24 million people, is its breakaway province, while Taipei has insisted on its independence since 1949 and has diplomatic relations with at least 15 countries.

The increased Chinese air activity over the region has been sharply criticized by the US, while Beijing rejects what it says is interference in “China’s internal issues.”

Chinese flights are now crossing into the ADIZ nearly daily, which is seen as a response to increased communications between Washington, its allies and Taipei. Asked by a town hall attendee about China's recent test of a hypersonic missile, Biden told the audience member not to "worry about whether they’re going to be more powerful."

"What you do have to worry about is whether or not they’re going to engage in activities that will put them in a position where they may make a serious mistake," he said. The president continued to maintain that he does not want a Cold War with China, saying he just wants "to make China understand that we are not going to step back." "We are not going to change any of our views," he said. 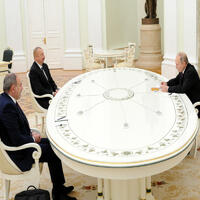