The Board of Directors of the European Bank for Reconstruction and Development (EBRD) has approved provision of long-term senior debt of up to $51 million for the development, construction and operation of a solar photovoltaic power plant with an installed capacity of 230 MW on a site located 9 km northwest of the Alat settlement in eastern Azerbaijan (the Alat Solar Project – Garadagh solar power plant), SİA informs referring to the EBRD website.

The total cost of the project is $250 million. Along with the EBRD, the project will be supported by a number of other international financial institutions.

The project will be developed by a newly established special purpose vehicle in Azerbaijan, which will act as the borrower for the project financings. Abu Dhabi Future Energy Company PJSC (Masdar) acts as the sponsor for the project.

“The Project will add 230 MW of solar generation capacity to the Azerbaijani power system and power approximately 110,000 homes. This would help substitute natural gas-based power plants and help in meeting the renewable energy targets set by the Government of Azerbaijan in line with county's commitments under the Paris Agreement. The Project will also result in strong environmental benefits with estimated annual CO2 emissions savings of up to 200,000 tons. This will assist the country in its low-carbon transition, reducing its current high reliance on thermal power generation,” reads the message.

The transition impact of the Project will also stem from its alignment with the EBRD's Green Economy Transition approach (GET) as it will allow producing electricity using solar power, which will assist the country in its low-carbon transition, reducing its current high reliance on thermal power generation.

The Masdar Azerbaijan Energy Limited Liability Company is a limited liability company incorporated in Azerbaijan for the sole purpose of the project.

Based in the UAE, Masdar is a regional leader and a major international player in renewable energy and sustainable urban development. 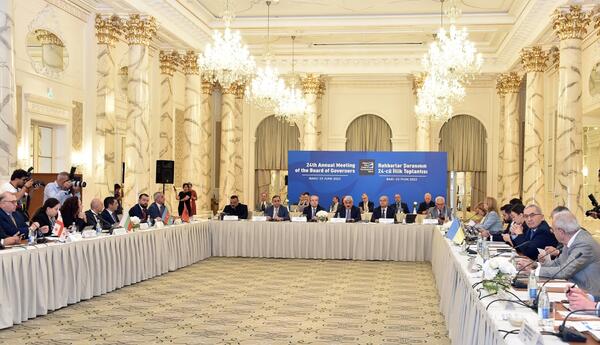